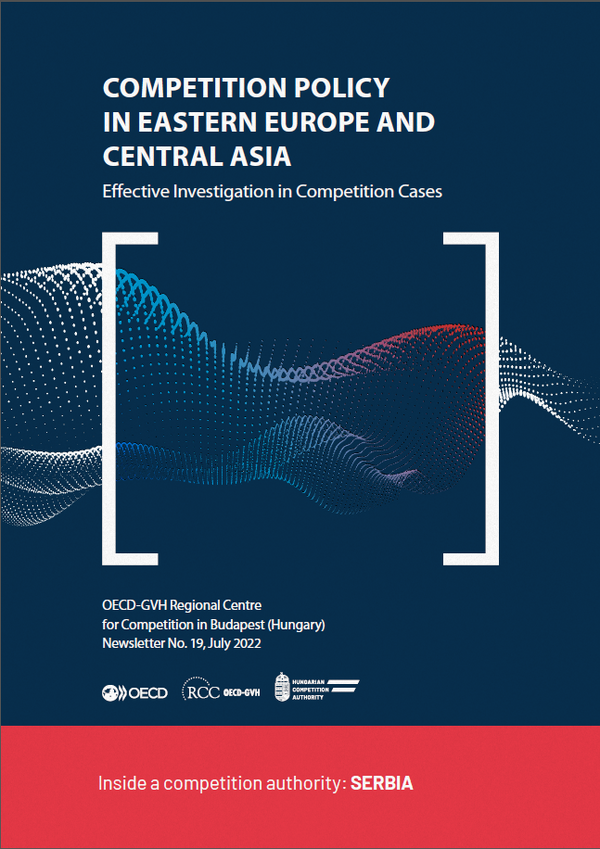 The OECD-GVH Regional Centre for Competition in Budapest (Hungary) (“RCC”) was established by the Gazdasági Versenyhivatal (GVH, Hungarian Competition Authority) and the Organisation for Economic Co-operation and Development (OECD) on 16 February 2005 when a Memorandum of Understanding was signed by the parties.

The main objective of the RCC is to foster the development of competition policy, competition law and competition culture in the South-East, East and Central European regions and to thereby contribute to economic growth and prosperity in the involved regions.

The RCC’s work focuses on four main target groups. The first group of beneficiaries are the competition authorities of South-East Europe and the majority of the CIS countries. This group consists of the competition authorities of Albania, Armenia, Azerbaijan, Belarus, Bosnia and Herzegovina, Bulgaria, Croatia, Georgia, Kazakhstan, Kosovo*¹, Kyrgyzstan, North Macedonia, Moldova, Montenegro, Romania, the Russian Federation, Serbia and Ukraine. The work targeting these economies is regarded as the core activity of the RCC. These economies have all progressed with the development of their competition laws and policies, but are at different stages in this process. As a consequence, the needs for capacity building differ among the involved non-OECD member economies and this necessitates a broad approach to competition outreach work. Major capacity building needs in these regions include:

Judges represent the second target group of the RCC’s activities. The judges seminars provide judges with an opportunity to improve their understanding of competition law and economics, to exchange views on the latest developments in EU competition law, and to discuss the key challenges arising in competition law cases.

The fourth beneficiary of the RCC’s work is the GVH itself. The agendas of the RCC workshops that are organised for the staff of the GVH are related to ongoing projects or “hot” topics and provide an excellent opportunity for staff to learn about state-of-the-art antitrust theory and enforcement practices.

Concerning the functioning of the RCC, the Memorandum of Understanding of the RCC provides that the GVH and the OECD are to make major decisions on their activities and work jointly. For this purpose, the parties meet on an annual basis to review the operation and performance of the RCC and to prepare the annual workplan.

Regarding the financing of the RCC, the GVH is responsible for providing most of the necessary funding for the functioning of the RCC, including an annual voluntary contribution to the OECD for the costs associated with the staff position in Paris. The OECD helps to co-finance the RCC’s operation and activities. In addition to this, both the GVH and the OECD co-operate in efforts to raise additional financial support for the RCC from third parties.

1* This designation is without prejudice to positions on status, and is in line with UNSCR 1244 and the Advisory Opinion of the ICJ on Kosovo’s declaration of independence. Hereafter referred to as Kosovo.